Background: Carcinoma of ectopic breast tissue represents a rare condition. Ectopic glandular tissue is frequently located in the axilla, so ectopic breast lesions must be distinguished from other subcutaneous masses arising in this location.

Case presentation: We describe the case of e 75 y/o woman presented to our department for the recent manifestation of an axillary cutaneous lesion. She underwent mammogram, breast ultrasound, fine-needle aspiration citology, breast MRI, thoraco-abdominal CT-scan and punch biopsy, and she was subsequently treated as a CUP-syndrome case. The final pathologic report showed the evidence of an ectopic breast tissue cancer.

Conclusion: Despite the rarity of this condition, physicians should always keep in mind the possibility of ectopic BC in order to make an early diagnosis and adequately treat these patients.

Ectopic breast tissue (EBT) develops as the result of an incomplete regression of the mammary ridge during embryologic development. The mammary ridge ranges from the anterior axilla fold to the groin; therefore, EBT may be found all along the "milk line", but also in locations outside the distribution of the mammary ridge. 1 This is the most common congenital breast abnormality. 2 The ectopic breast tissue was observed in 327/12,177 (2.7%) patients attending a breast unit. 2 This tissue may consist of breast parenchyma, nipple, areola or a combination of them. 3 The most common symptoms of EBT include a palpable mass, pain, swelling, the impairment of arm movement, and secretion during pregnancy. 4 The most frequent disease affecting EBT is fibrocystic disease, besides various tumors reported in the literature, including fibroadenomas, phylloides tumors, and adenocarcinomas. 5 Primary cancer arising from the ectopic tissue is extremely rare and is frequently found in the axilla, but it has also been reported in the subclavicular and anterior axillary region, in the upper abdominal skin outside from the "milk line", and over the sternum. 1 Due to its rarity, the diagnosis and adequate treatment result are often delayed, negatively affecting the prognosis.

A 75-year-old Caucasian woman presented to our department for the recent manifestation of an axillary cutaneous lesion. At the moment of the clinical examination, she reported no family history for breast cancer (BC) nor ovarian cancer. She had a personal

Open Access history of hypothyroidism, anxiety disorder, chronic venous insufficiency, and hypercholesterolemia. She had recently undergone a breast ultrasound that described a hypoechoic elliptical lesion with hyperechoic border and moderate intralesional vascularization of about 23mm, corresponding to the cutaneous/subcutaneous clinical finding. Nevertheless, the ultrasound (US) described a focal thickening of an axillary lymph node and suggested a fine needle aspiration cytology (FNAC) of the two findings. A contextual mammogram confirmed the absence of breast suspect lesions. The axillary lesion underwent FNAC, showing the presence of atypical ductal elements (GATA3+) with irregular nuclei, suspicious for metastatic elements from occult BC.

To rule out the possibility of an occult BC, a breast magnetic resonance imaging (MRI) was performed. The exam did not show any breast lesion, but it indicated 3 suspect axillary ipsilateral suspicious lymph-nodes. The patient underwent a thoraco-abdominal CT-scan that did not show any other suspect lesion.

During the clinical examination, the patient underwent a punch biopsy of the cutaneous lesion. The histopathologic examination described a subcutaneous localization of an estrogen-receptor positive, progesterone-receptor weakly positive, 10% Ki67, and HER2 negative BC (GATA3+), but it was not able to define it as metastatic lymph node versus primary BC, due to the absence of normal breast tissue adjacent to the lesion.

After a multidisciplinary discussion meeting, we decided to treat the patient as a CUP-syndrome case, and we excluded the possibility of submitting the patient to neoadjuvant therapy due to her age and comorbidities.

Therefore, the patient underwent an upper-outer left quadrantectomy and ipsilateral axillary lymphnode dissection. The day after surgery, the patient was discharged with an aspiration drainage that was kept in place for 7 days. The post-operatory course was uneventful. The final histopathologic examination described an ectopic non-special type G2 estrogen-positive, progesterone-positive, 22% Ki67, HER2 negative BC. The mass measured 25mm in the longest axis (pT2), the margins were clear, no lympho-vascular nor perineural invasion was described, and the skin was clear. Macrometastases were found in 3/13 examined lymph nodes (pN1a, no extracapsular invasion).

During the multidisciplinary meeting, the patient was sent for radiant therapy on the breast, 5-years aromatase inhibitor, and adjuvant chemotherapy (epirubicin and cyclophosphamide (EC) x4 plus taxole x12).

The carcinoma of EBT represents a rare condition, accounting for 0.2-0.6% of all BCs. 678 The most commonly affected region is the axilla, representing 91.5% of the cases. 9 In a review of the literature, it has been reported that 6% of EBT carcinomas occur in male patients. 4 Unlike in our case study, Zhang et al. found that EBT carcinoma affects patients at a younger age than BC (72.8% of patients were pre-menopausal). 10 The median age has been reported to be 51 y/o, about 10 years less than the median age of BC patients. 11 Ectopic or accessory breasts may be divided into eight groups, according to the presence of nipple, areola, and/or glandular tissue. The ectopic glandular tissue is frequently located in the axilla, so ectopic breast lesions must be distinguished from other subcutaneous masses arising in this location. 8 As in our case, the usual clinical presentation of EBT carcinoma is a palpable, fixed axillary lump with irregular margins, which presents as a subcutaneous lesion in 45% of cases. The neoplasm does not arise from subcutaneous tissue, but from EBT; however, due to the usual narrowness of EBT, US findings may suggest a subcutaneous fat lesion. 10 The average tumor dimension at presentation is 28mm, it does not necessarily involve the skin, which may be normal, discolored or ulcerated, bleeding may co-exist, and in rare cases, it may manifest as an abscess. 111213 In our case, the skin was involved, and the lesion was discolored.

Standard mammograms do not often detect ectopic breasts because of their peculiar location, but medio-lateral oblique view may visualize the ectopic tissue in the axilla. The ectopic breast tissue resembles normal glandular parenchyma but is located separately from the rest of the gland. 14 Cancer arising from EBT usually has the same radiologic features as a typical BC (irregular margins, stellate mass), but may mimic a metastatic axillary lymphnode. There are not specific findings for ectopic BC. 15 On MRI, the signal intensity of EBT is similar to that of the normal mammary gland, and intravenous contrast enhancement presentation is heterogeneous, often similar to normal breast parenchyma. 17 It may present as hypointense signal on T1 weighted sequences and intense signal on T2, but MRI findings have not been clearly defined due to the rarity of the disease. 1112 On US, ectopic breasts are usually seen as echogenic areas resembling normal glandular tissue. 18 FNAC may be useful for the diagnosis of malignancy, but the differential diagnosis between ectopic BC and lymph-node metastasis from occult primary lesion in patients with adenocarcinoma may be particularly challenging. Histologically, the lack of lymphoid tissue and the presence of adjacent normal breast tissue (ducts and lobules) point to the need to confirm the diagnosis of ectopic BC and exclude the possibility of metastatic lymph node. 19 The most frequent differential diagnosis includes lymph-node metastases -as erroneously happened in our case -lymphomas, axillary tail BC, and benign tumors. 410 Differentiating an EBT adenocarcinoma from an axillary lymph-node metastasis may be challenging. 49 An accurate US and mammographic evaluation, and an adequate tissue sampling are essential to a definitive diagnosis. 9 The presence of normal breast tissue near to the tumor and the presence of immunohistochemical markers usually help the pathologist in achieving the correct diagnosis. 49 Due to its rarity, the definitive diagnosis is delayed for 40.5 months on average. 4 Our patient experienced a delay of 6 months between the first US examination and surgery.

The most frequent histologic type is ductal carcinoma (72-29%) -as with our patient -followed by lobular, medullary, and other subtypes. 4 Extremely rarely, phylloides tumors, papillary carcinomas, Paget disease and sarcomas have been reported. 16 The majority of patients present with stage II or III disease -as with our patient. 10 Axillary metastases have been reported in 46-%1.8% of cases. 1112 The treatment of EBT adenocarcinoma is the same as that of BC, including surgery, neoadjuvant /adjuvant chemotherapy, radiant therapy and hormonal therapy, according to stage and molecular subtype. 4 Post-operative adjuvant therapy protocols are similar to those used for usual BC, and depend on BC molecular subtype, staging, patient comorbidities, and menopausal status. 7 The use of radiotherapy is still controversial. Some authors suggest radiation only for the tumor bed, but others for tumor bed and axilla, and still others for tumor bed, axilla and breast. 17 The prognosis of these group of patients is difficult to establish because of the limited follow-up of this rare condition. 6 Some authors have reported poorer outcomes than in usual BC, due to its proximity with axillary lymph node that seems to be associated with early lymph-nodes metastases. The number of involved lymph nodes has been defined as the strongest prognostic factor. 11

We reported a rare case of EBT axillary adenocarcinoma with axillary lymph-node metastases, which we erroneously diagnosed and treated as a CUP-syndrome. EBT tumors are a rare condition but they must always be suspected in patients presenting with hypoechoic superficial axillary masses. Core needle biopsy or punch biopsy must always be performed to obtain a correct diagnosis. Once the adequate diagnosis is established, it must be treated as an usual BC, since the optimal treatment has not been clearly defined yet due to the limited data. Physicians should always keep in mind the possibility of ectopic BC in order to make an early diagnosis and adequately treat these patients.

The patient signed an informed consent for the presentation of her medical record in a scientific journal. 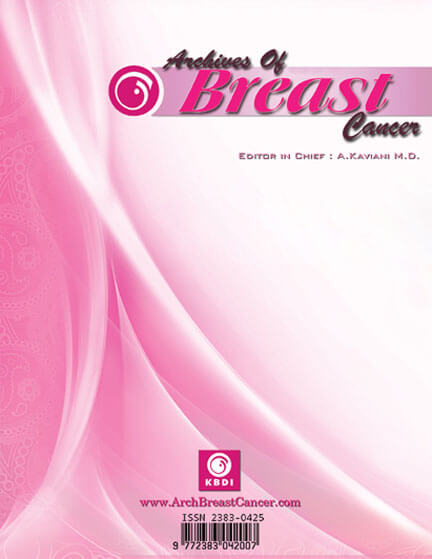